I’d like to believe that some of my favorite travel bloggers don’t always write a new blogpost as soon as they take a trip. If they do, well then let’s just pretend they don’t for the sake of not making me feel like crap about my procrastination.  It’s been over a month since my graduation and I think it’s finally time to write about my graduation trip, but I’ll try to leave out unnecessary details because I should really be getting ready for my Tinder date! Yeah, don’t ask.

Plans of going to three cities in Spain and three cities in Morocco didn’t actually work out, but that’s the travel life – nothing goes as planned and you just gotta suck it up and go with it. Barcelona and Marrakech were the winner cities, and I promise I won’t complain about anything else other than the fact that I didn’t find a great paella in Barcelona and that my mom was offered only 300 camels for me, but a whopping 500 camels plus a Ferrari for my younger sister.  Yeah, that actually happened and I was pissed! Like, “Dude, if you wanna buy me, give my mom 500 camels, a Ferrari, PLUS three Moroccan rugs please, thanks” (rolling my eyes and snapping my fingers). 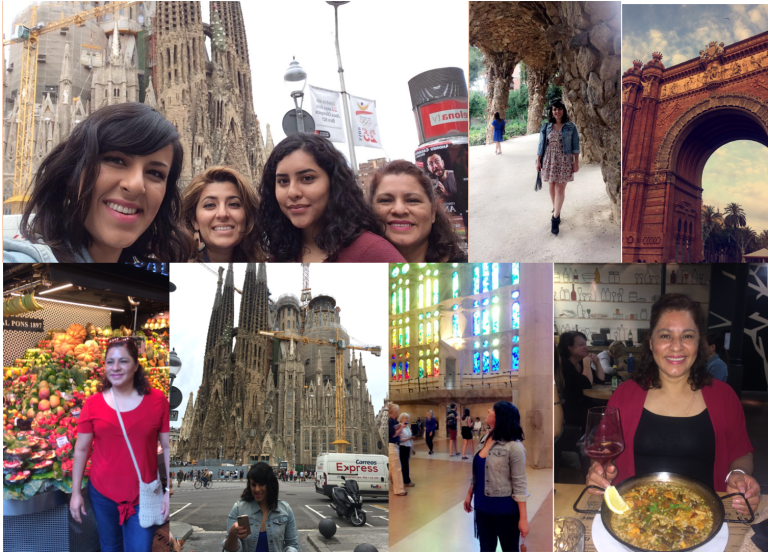 Okay all jokes aside, Barcelona was a great trip! The first time I visited was when I was studying in Madrid and decided to take an overnight smelly bus, only to spend 16 hours in the city before heading back in yet another smelly bus – one where a guy fell asleep on my shoulder for 5 of the 8 hrs. I’m cuddly, I know.  Anyway, we visited the colorful Mercado la Boqueria and of course had a zumo before going to see Gaudí’s masterpieces.  La Sagrada Familia was spectacular, and I’m so glad I got to see it this time around because it was my favorite part of Barcelona. Watching a flamenco show was right up there with favorites, but no hot dancer with a nice butt will ever have my heart like Antoni Gaudí does.

Next was dreamy Marrakech!  The first day we arrived we headed to the Medina and got sucked into a place that sold all the Moroccan goods.  It was my sister’s fault for asking how much a rug was, but I guess I didn’t help by asking if they had couch covers too; one hour later and we were still there, haggling and drinking tea with the employees. Thankfully we decided to ask the employee for dinner suggestions, because he ended up walking us to a great rooftop restaurant with the view of the mosque.  We would’ve never found this place had it not been for him, so I guess the expensive rug and couch cover were worth it after all.  I have to admit that even though the view of the sunset from the rooftop was great, the best Moroccan sunset was the one I saw during our camel ride.  It was incredible!!!!

The vibrant colors, shapes and patterns on the inside of buildings and throughout the shops were seriously mesmerizing.  I found myself wanting to take photos of everything, but I held back in fear that I’d get dragged into some more haggling that I wasn’t even planning on doing.  But despite all of this beauty around the city, my favorite part of Marrakech was witnessing the people’s devotion to their religion.  I’m not religious at all, but I can’t even explain to you the feeling I felt when I saw almost the entire city walking towards the Koutoubia Mosque with their little rugs in hand, ready to pray.  It was unbelievably touching.  Visiting during Ramadan was unplanned, but it made our trip that much more spiritual, memorable, and a bit emotional if I’m being honest. We made it back to Rome where my family spent their last few days with me.  It was simply nice, relaxing and full of shopping + eating. I wish they lived closer to me, because exploring the world with my family makes my heart so happy it hurts! I’ll just keep scrolling through my photos until we take another family trip… next time hopefully with dad.

P.S. Any great photos on this post were taken by my sis. I’m sure some jerk is out there taking amazing photos with my stolen iphone and its beautiful Frida Kahlo case. Ugh.