My first stop from my EF College Break trip couldn’t have been better. It’s best to get the wild stuff out of the way right?  Well lets just say, wild is an understatement.  A night out in the Red Light District and you’re forever changed.  We were given a tour by a gorgeous Amsterdammer named Bas.  He was such a proud Amsterdam man he even had the city symbol ‘XXX’ tattooed on his calf- it was pretty rad!  He walked us through the narrow cobble-stoned streets of the Red Light District while he gave us a bit of a backdrop.  I won’t talk about it here because I think you’re capable of doing your own research, but you should definitely look into prostitution legality in Holland, it’s interesting stuff.  Anyway, these narrow alleyways were covered with half-naked women behind glass doors waiting to get a client. Some of these women were gorgeous, some were average, and then there were the trans-genders and transvestites.  I could hardly tell and it was amazing to me!  I wish I could show you a photo, but we weren’t allowed to take any.  It was strictly prohibited and there were guards outside the doors double checking.  I was curious to see how the men approached the ladies, so we walked around a bit more and after a few minutes, I finally witnessed a very handsome man walking into one of the doors.  Then the curtains closed…I didn’t want to know any more than that. 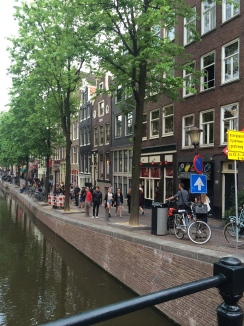 Once we had free time, I hung out with a few of the people from our group.  We bar hopped, took some shots, and went to a live peep show.  Call me naive, but I really thought that meant a strip-tease of some kind. I paid £2, went in to a stall-type-thing and had 2 minutes to watch two people having sex on a rotating bed! I was mortified!! There was a glass window separating the watchers from the “doers” (that’s what I’ll call them), but they could also see us. I could see other people in the stalls across from us, wide-eyed and giggly.  I wasn’t in there alone though; a girl I had met that day went in there with me. It really was a strange bonding experience, but we held on to each other for support.  To top off the weirdness, the guy in there (the doer) just stared directly into our booth AT US while he was doing his thing (or whatever you want to call it).  Let me tell you, it was NOT sexy, it was NOT hot, it was plain CREEPY!  We didn’t know what the hell to do, so thank goodness our two minutes were up because we ran out of there fearing we’d be scarred for life. My eyes were burning! Live porn is definitely not my thing.

I’m not a regular pot smoker, but I won’t deny that I’ve done it a few times in the past.  I figured, “Heck, I’m in Amsterdam! It’s legal!”. So there I go, to a coffee shop, which by the way doesn’t actually MEAN “coffee shop”.  Even though they do sell coffee, tea, and snacks,  it’s more of a smoke your weed/eat your edibles hangout spot. If you’re interested in that minus the drugs then you’re probably looking for a koffie huis (coffe HOUSE). One small word makes a big difference. Anyhow, I ended up buying an iced coffee and a space cake while my other friends decided on a joint.  Bas our tour guide from the night before wasn’t allowed to encourage drug use of course, but since he knew many of us would do it anyway, he at least warned us about a few things; thankfully I remembered that he had told us NOT to eat an entire space cake. It was so good (half vanilla, half chocolate), I practically had to force myself not to eat it all.  I ate about a quarter of it, then I proceeded to take a drag from the joint. Holy mother of hell, that was a bad idea!!! I really had no idea how much time had passed, but it felt like I had missed an entire 10 minutes of my friend’s conversation.  I caught myself staring intently at the floor thinking “I’ve never been this high. This is why I don’t smoke. Are people staring at me?”.  Yup, you guessed it, I’m a paranoid smoker.  I looked over to my friend Lisa who was also taking a liking to the floor. I asked if she was okay and she responded, “I’m just soooo hiiiiigh right now!” I wish you would’ve heard the way she said it, it was cutely hilarious. At least I wasn’t alone in my level of highness. Perhaps it didn’t help that we had had a drink with our dinner right before.  Cross-faded much?

Thank goodness it was the end of the night!  We went went back to the hotel and I slept like a baby.  Red Light District, you are amazingly strange and full of bad influences but I don’t regret a thing!  My parents would sure be disappointed though…

IMPORTANT INFO:  I DO NOT encourage any drug use.  This is simply my blog, my story, my choices.